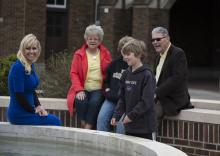 For Jim Stucky, a retired business owner who spent his career at the company started by his father, giving back has always just been a part of life.

"My father told me once, 'It seems like when you give, you just get back so much more,'" Jim said. "I’ve always remembered that, and my wife and I have seen that in our own lives. What we give, we feel so good about."

Jim and his wife, Barb, have contributed generously over the years to various charitable organizations in their lifelong home of Newton, but the concept of philanthropy was something that Barb was a bit skeptical about at first.

"My father told me once, 'It seems like when you give, you just get back so much more.'"

"I grew up in a family that didn’t have a lot of extra money, so giving away money was really a foreign thought to me. When Jim first started talking about this, I think I looked at him strangely, kind of like, 'You want to give away money?' But then I saw the things that could be accomplished and the good feelings that come with giving. I certainly got on board and support it wholeheartedly now."

The Stuckys became acquainted with the Central Kansas Community Foundation (CKCF) when it was in its initial stages. It didn’t take long for them to see the benefits of having a foundation in their community.

"After our parents passed away, we established an endowment at the CKCF in their honor — the Stucky Family Fund. We’ve used it to give to a number of causes. I can’t think of a better way for people to be able to start small and have someone help them in the process of getting money to causes they care about."

In 2008, the CKCF started a "10K Club" to give more people an opportunity to establish endowments at the foundation. People could give $1,000 for ten years, and once they reached the $10,000 mark, they could designate where they would like the funds to go.

"It is a real benefit to our grandchildren to be able to see what they can do by giving a little money to a cause they care about from a young age."

Hearing about this program sparked an idea for the Stuckys. It was an easy way for them to set up endowments for their two children and four grandchildren, and would allow them to pass on the joy of philanthropy to the next generations.

"We liked the idea that we could do something for our kids that would give them the real feeling of helping others, and that’s what they’re experiencing right now," Jim said.

"Every year, they have a certain amount from their endowment to give to the 501(c)(3) of their choice. What Barb and I are hoping to accomplish is for them to have that same feeling we have when helping someone. We think we’ll spur something that they will feel good about, and continue to do on their own in the future."

"It is a real benefit to our grandchildren to be able to see what they can do by giving a little money to a cause they care about from a young age," Barb added.